Felicity was my first American Girl doll, but Anne was my second.

My sister and I both wanted a Native American doll- Kaya was not yet released. We each bought a different AGOT, and decided they were Cherokee. 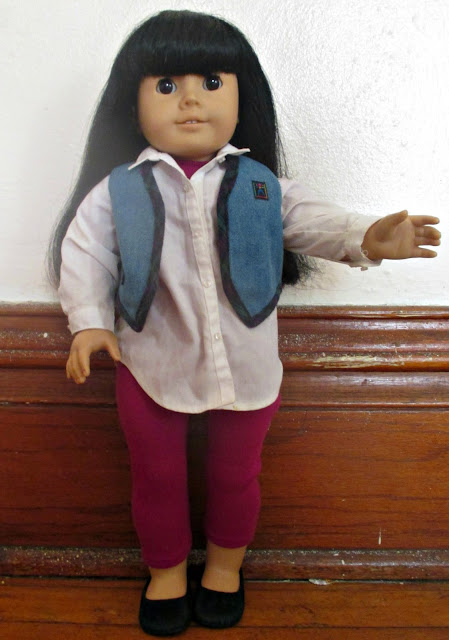 She is named after Anne of Green Gables. Anne with an e, if you please.

It took me ages to save up for her, and I was very proud of my hard work.

Speaking of which, back then AG had free kits you could send off for that helped you keep track of the money you saved towards a goal, and had suggestions for earning money as well. This was a great way to learn about money management as well as enjoying your doll, and I am sad that they discontinued that, even if that had to charge for the kits.

This is Anne's meet outfit. It is the very first meet outfit for the modern AG dolls. And it is excellent.
It really reflects the style at the time. I hated the maroon, personally, but nonetheless it was right on target. It includes maroon leggings, a maroon T-shirt (under the white shirt), a long sleeved white shirt, black flats and a reversible vest. The vest is denim on one side and maroon on the other.

I had flats exactly like those and so did my fourth grade teacher. I also had a white shirt like that.

The best part of this was its fantastic mix and match possibilities. It had so many pieces, so you could leave off the white shirt, or reverse the vest, or leave the vest off- lots of possibilities in one outfit. And the shoes could match any number of outfits. Just fantastic. None of the current meet outfits live up to this. The newest meet outfit, with its additional mix and match accessories, tries to, but it can still only mix and match with itself. The shoes, the vest and the white shirt in this outfit could go with a lot of other clothes. The maroon, alas, remains maroon, with limited potential.

Anne, by the way, is the original AGOT #6. This was discontinued shortly later and replaced with a blonde with green eyes. 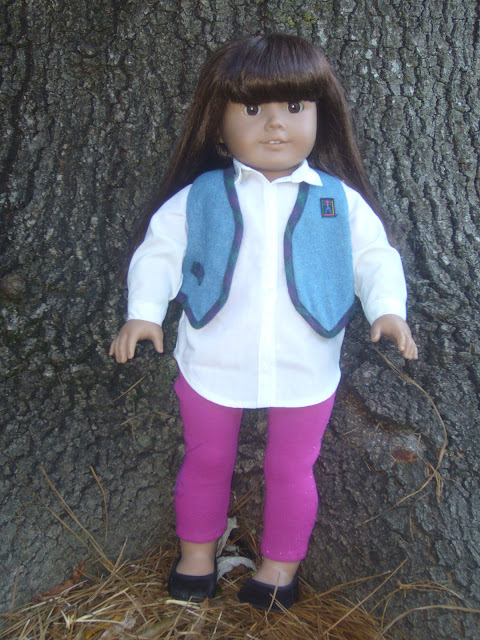 Anne and Meg are cousins and they get along great. 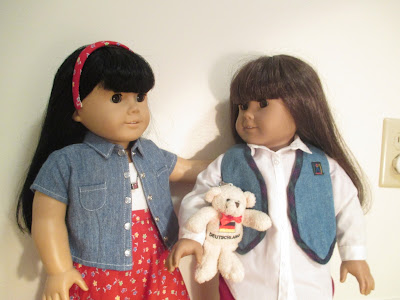 Meg, unlike Anne, has never been changed out of her meet outfit and is very happy with it.

They are old enough to vote and still in great condition!