Surjan at the Beach

Hearts for Hearts doll Surjan got to go to the beach for the first time.

She is very happy! 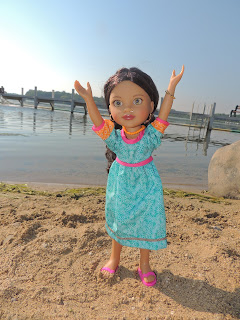 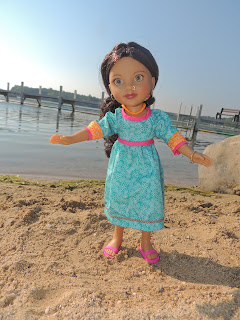 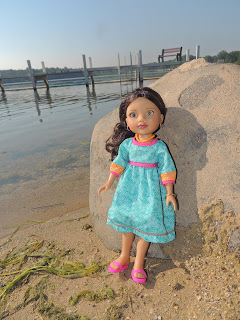 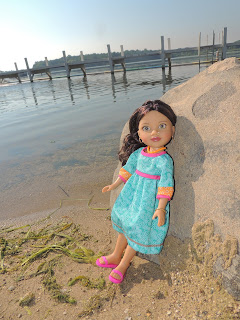 Next time I will have to bring some friends for her to play with!
at July 30, 2018 No comments:

I saw that My Life As had llama pajamas for dolls and I really wanted them!

Llamas are a special thing in my family. I have two pairs of my own llama pajamas, one for Christmas and one for spring.

Luckily for me, mcooper of Isn't She Dovely found them for me! Yay! Thanks so much! Doll collectors friends are the best.

Here is Zia modelling the pajamas: 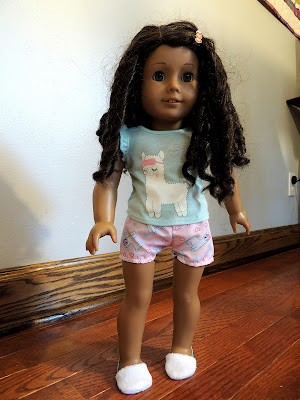 It fit just fine, which I was pleased with.
If it had been too small, my back up plan was to make them into pajamas for A Girl for All Time dolls.

Here is Zia getting ready for bed: 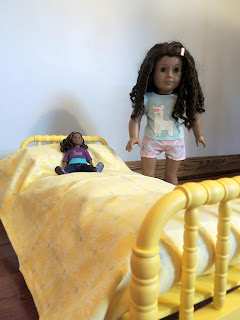 And all tucked into bed with mini Gabi: 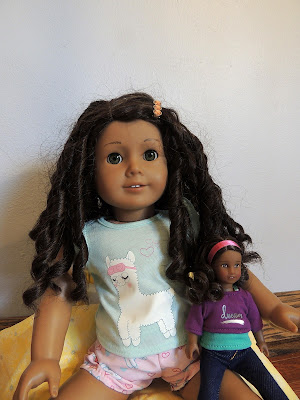 Email ThisBlogThis!Share to TwitterShare to FacebookShare to Pinterest
Labels: American Girl dolls, mcooper, My AG 44, My Life As, Zia

The girls worse themselves out at the beach.

Here are Amelle and Cedar getting ready for bed.

(I was going to put them in two beds, but then I realized that they both fit in Melody's bed and it was too cute.) 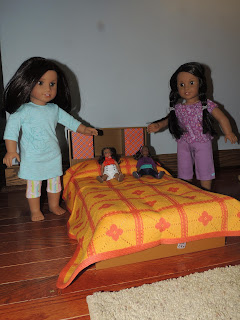 Playing with their dolls. 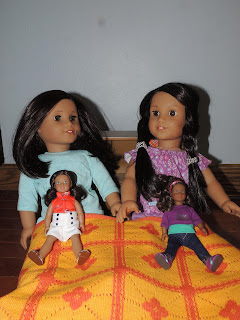 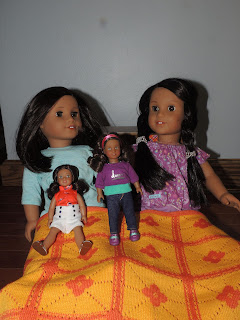 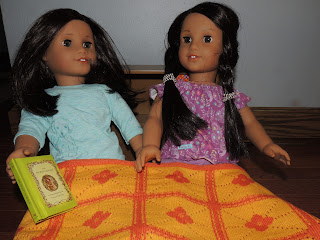 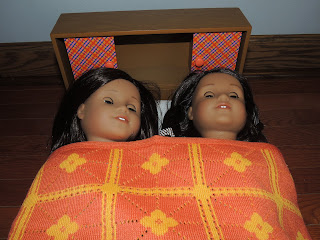 Bo is making sure that Melody has lots of fun outside this summer!

Here are Melody and Bo at the beach! 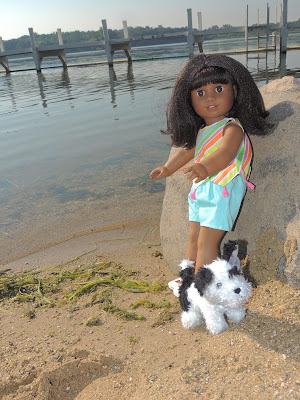 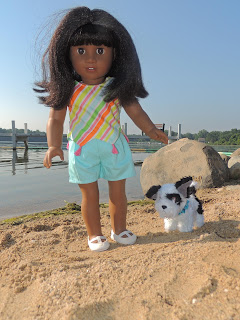 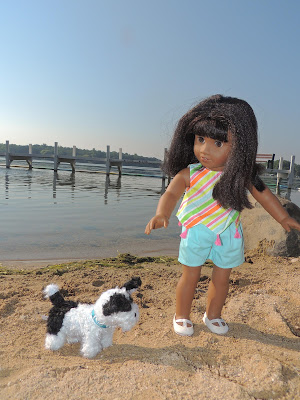 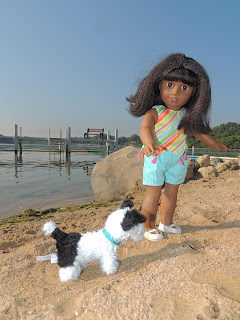 A Girl for All Time Elinor

I was finally able to open my A Girl For All Time Elinor. 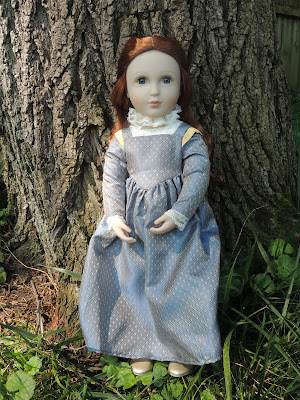 It is really unfortunate that this is after the death of my guinea pig, who was also named Elinor.

The last time I got a doll with the similar name as a pet, the pet also died.

I had a really sweet dog named Mattie, who died at the name time I got my Brigitte Frigast gnome Mads.
You can see Mads in this post.

There is clearly some serious bad luck for me with owning a doll that has a name similar to a pet.

Elinor the doll is gorgeous and I love her. 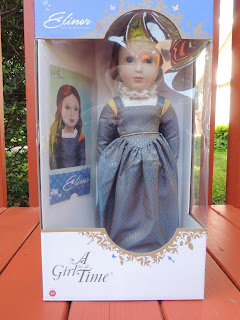 Here is Elinor in the box. 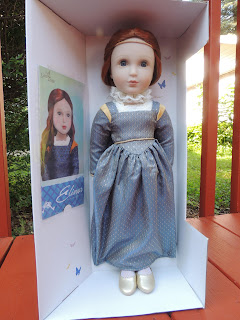 Here she is with the outer box removed.
I needed a scissors to remove the bands holding her in. I was annoyed that one of the bands went through her hair.
I might have been able to untie the bands, but I was too impatient. 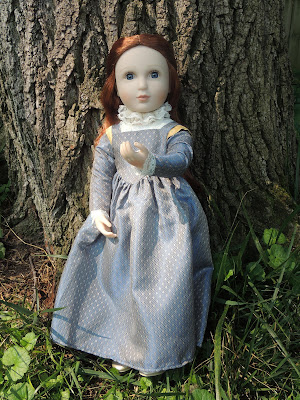 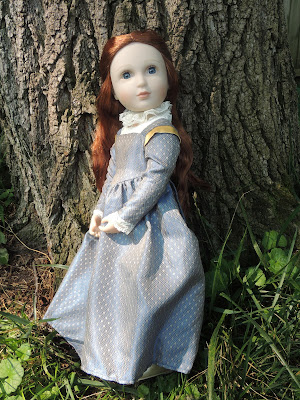 She is just soooo pretty. 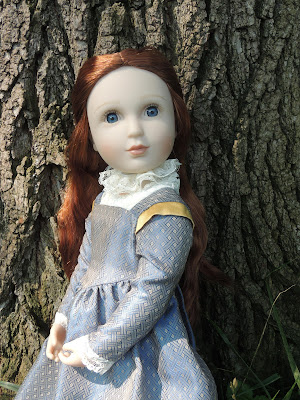 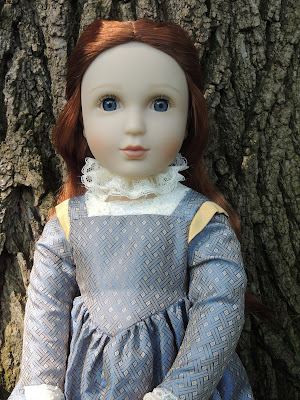 I will get some pictures of her together with Nisha soon!
at July 26, 2018 No comments:

Email ThisBlogThis!Share to TwitterShare to FacebookShare to Pinterest
Labels: A Girl for All Time, dolls, Elinor

Greenchiligirl described my pictures of the new MCM dolls as "Beth's summer camp."

So this morning, summer camp went to the beach.


I am still getting used to my fancy camera. It has a setting to use when there is back lighting that really improved my pictures today.


You guys, I am so glad I bought these My Life As Adirondack chairs. They are awesome.
It makes it so much easier to make an outdoor scene with dolls.
Especially if they don't want to stand up!

I think the girls enjoyed their morning at the beach!
at July 25, 2018 No comments:

Items bought at MCM are not supposed to be resold and are not eligible for free repairs from the company.


Dolls and some other items have an X marked on their bottom to show that they came from MCM.
Most items also have their barcode marked out.

In the doll collecting community, it is considered acceptable to pick up a doll for another collectors as long as you are only reimbursed for the original cost of the doll and shipping, and do not make a profit on it.

There were a lot of requests on American Collectors this year. I was not able to fill most of them.

I planned to buy two dolls and Melody's bed for myself, and I agreed to pick up dolls for three other people instead. Since you have to carry everything you buy out to the car, that was as many as I could handle for sure!

To be honest, five dolls was probably more than I could handle. I bought two dolls and a bed, and I wore a hole in the bottom of the brand new bag that I was carrying them in.  I am sad about that.

One of the dolls I was looking for was JLY 58. By the time I got there, there was only one 58 left, and she had permapanties, so I did not buy her.

I got a 66 who is named Cedar for greenchiligirl and a 62 who is named Amelle for BeauCouer. I am so glad I was able to bring two dolls home, even if I am not keeping them. I always warn people that I keep the dolls for a couple of days and take pictures  of them.

I enjoy doing this, and I think it's nice that the dolls get to see a bit more of Wisconsin than just the inside of the warehouse. It's sort of a miniature travelling doll arrangement.

I took pictures of Cedar, Amelle and my #62, Stella together. I think some of these turned out nicely.

Thanks for letting me play with your dolls, guys!


I hope you enjoyed the pictures!
It's much more fun to go out and take doll pictures than it is to mope around my empty house.

I took pictures of Ruby the first year I went to MCM and JLY 59 the second year.
This is a fun tradition for me.
at July 24, 2018 No comments: