The new Keeper's Dolly Duds pattern is finally being released by Simplicity!

The pattern consists of Regency designs, and it looks great!

I can't wait for it to be released! It is supposed to be in the fall Simplicity catalog. I will definitely get this pattern as soon as I can.

Hearts for Hearts released some more pictures of Shola on their Instagram, just like they did for Mosi.

This one fits with her story that she learns to be a circus performer.

Email ThisBlogThis!Share to TwitterShare to FacebookShare to Pinterest
Labels: Hearts for Hearts, Shola

My mom found this bookcase for me at Costco. I had a hard time envisioning it when she said there was a bookcase "like a ladder" and that it would be perfect for displaying my AG dolls.

It turns out she was right! 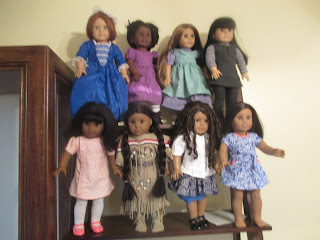 Each shelf in this bookcase sticks out two inches further than the one above it. That means, that although the rows are less than 18 inches apart, it is perfect for putting AG dolls on the edge of each shelf.

You can also put books or other objects on the shelf behind the dolls! Double duty! 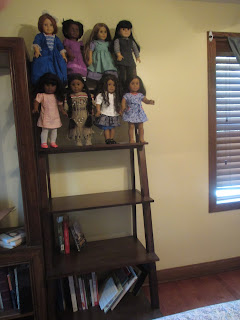 I have not filled up the shelves yet. 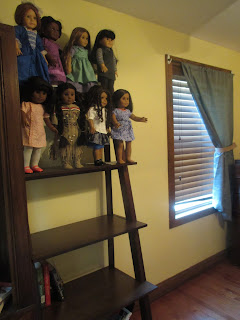 This picture is at an angle to help you get an idea of how the bookcase works.

This also works with smaller dolls, like Hearts for Hearts or A Girl For All time.

But the dolls in question have to be good at standing. If they are wobbly, I would not try this display solution.

Check out my wall color- we just painted this room. The amount of housework I am doing is keeping me from posting as much as I would like.
at June 19, 2018 No comments:

More about the New Release

The Ready to Learn Outfit is cute, and is probably my favorite of the new moddie outfits.
I like that it has so many pieces.

The Volcano lab set is silly because Our Generation has already had one out for at least a year.

The Cool Colors Outfit makes me thing of Claudia Kimchi from the Babysitters Club.

I like the pizza party set.
All of the food pieces are something that I would eat and would make a fun sleepover.

I don't like the pink ruffle or belt on Nanea's new dress. They seem out of place.

I wish they would make more every day clothes for Rebecca instead of movie dresses. This one reminds me of Lady Mary on Downtown Abby, However.

Read part one about this release here.

American Girl broke with tradition by releasing the new goodies on a Monday instead of a Tuesday.

I was not excited about this release until it realized it was here.

I like the new dark Josefina mold, Truly Me #80. She is cute.

I like the Not!Kanani, #79, but I wish she had brown eyes instead of hazel.

Sushi PJs are cute, but not my thing.

I am glad there are boy PJs. I feel like the bottom of the PJs could match the top better, though.

I am getting into gardening, so I like Kit's gardening stand. Why does it say it is limited quantities, though?
They just released it today!

I like Kit's overalls! It is her third pair of overalls, which is kind of a lot. I was hoping the overalls would be for Rebecca, since it would be something new for her collection. And I don't even collect for Rebecca.

I got a picture of Stella today! Isn't she pretty? 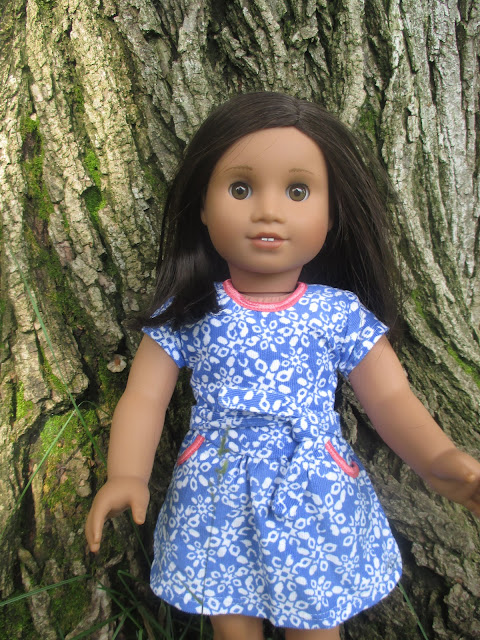 Hearts for Hearts recently released some new pictures for Mosi on Instagram. The post confirmed that Mosi will be re-released in the fall.

It didn't mention Shola, who is supposed to be released alongside Mosi.

I love Shola, so I hope we see some pictures of her soon!

Email ThisBlogThis!Share to TwitterShare to FacebookShare to Pinterest
Labels: Hearts for Hearts, Mosi

I just got a notice that my Girl For All Time Elinor has shipped! Squee!