I knew that Mattel had an outlet store of sorts in Middleton, Wisconsin, called the Mattel Toy Store. 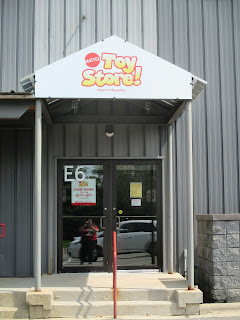 I did not bother to go because I was told that it did not carry American Girl brand.

This year, I heard that they did indeed have American Girl brand items. Apparently, this is new.

The store is less than half a mile away from the MCM benefit sale, making it easy to visit both locations.

I went on a rainy day when I needed an adventure. I really wasn't expecting to buy anything.

The store is actually located at the American Girl offices, around the right side and towards the back.

I was truly fangirling as I pulled up and saw the official American Girl company sign. 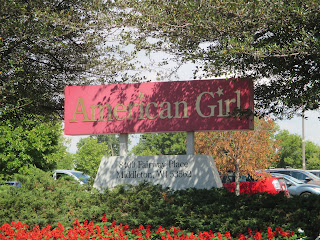 When I went in the store, there was a display of Truly Me dolls and some outfits, and a smaller display for Wellie Wishers and Bitty Babies. 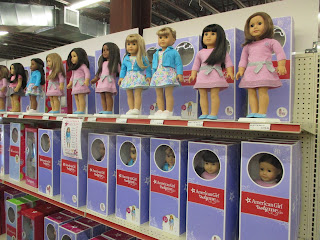 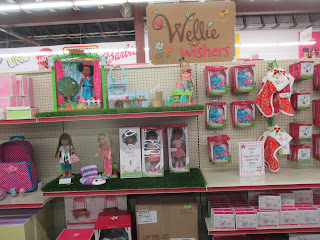 There were lots of other Mattel brands as well, including of course Barbie, Mega Contstrux, and Enchantimals. 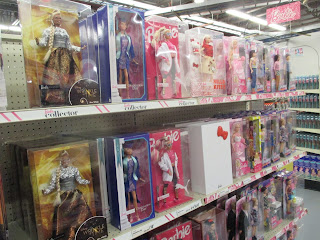 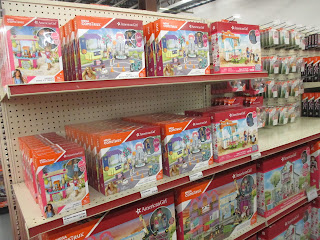 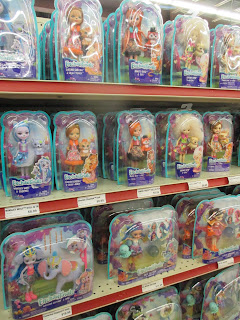 I found that there was a second room to the left that was full of more American Girl brand items, including Truly Me, Beforever, Girl of the Year, Wellie Wishers and Bitty Babies.

I discovered that most of the price tags had prices that were about the retail cost of the items.

American Girl dolls were $115, Wellie Wishers $60, and AG outfits and Barbies were the prices I would normally expect.

THEN I found out that the items that had green price tags were half off.

The actual Truly Me AG dolls were still full price, $115.

But the Wellie Wisher dolls and all the American Girl clothes, accessories and pets were all half off.

The sales ladies chuckled when they told me this, and suggested that I might need a cart.

I was really tempted by a lot of items at half off!

I ended up getting Felicity's accessories, the lasagna set, and the Dino Mite outfit.

I also picked up a few Mix and Match items for a friend. 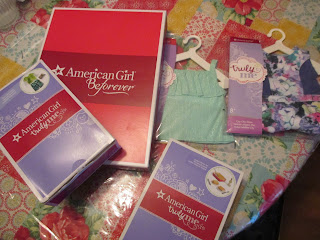 As to selection: there were not any boy dolls there. There were lots of moddie clothes, and lots of AG dog clothes.

There are lots of AG minis. 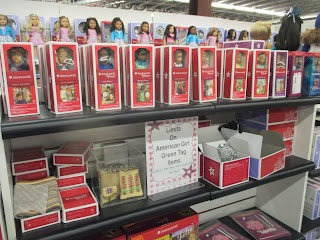 They had a few things for the historicals, but it was mostly the pets, and maybe the nightgown or the accessories. There were very few historical outfits.

The Barbie selection looked good to me, but I don't collect for Barbie. Almost all the Barbies were the full price you would pay at any other store.

They only had two Wellie dolls, mostly Ashlyn and a few Emersons.

I don't think I saw any actual Bitty Babies for sale, but they had some accessories and furniture for them.

There was also some AG furniture, like Nanea's and Josefina's beds..

I think some items were probably returns or items that had been damaged in transit. I saw a lot of damaged boxes.

A lot of the Truly Me items were ones that I had seen for sale on the AG website, like last year's holiday outfits. 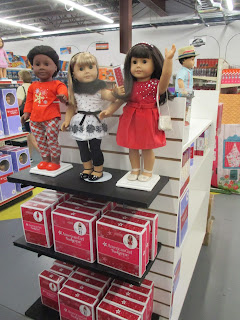 One item that I thought was interesting was that they were selling lots of Lea's meet outfit, and also her turtle. 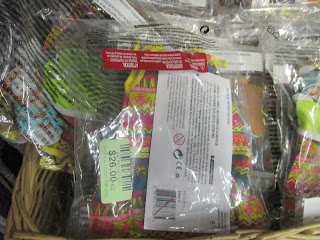 This picture also shows you what the green tags that indicate the half off price look like.


The store had a play area for people with kids. It was stocked with toys, both Barbie and AG, as well as a couple of other brands. 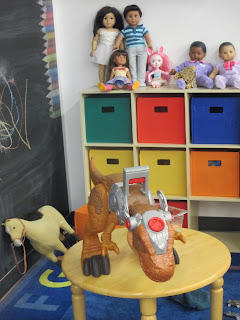 It was a fun trip, and I am glad I went.

I would recommend it, but if what you really want is a particular item, especially one for historicals or that is currently on the website, I would say this is probably not the place to go for that.
at August 21, 2019 2 comments:

Nanea on the beach

Here are some proper pictures of Nanea with her new eyes!

I took her to the beach today, and got some fabulous pictures.

Nanea was such a great model.

I swear, I  didn't even need to think up poses for her, she just seemed to pose herself naturally. 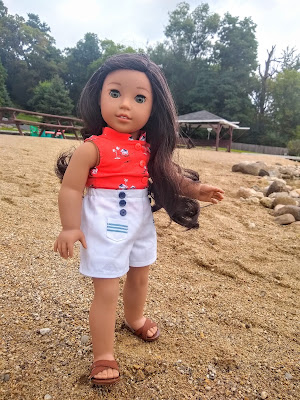 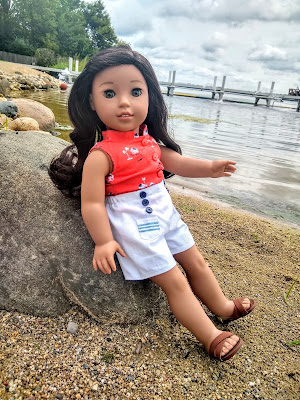 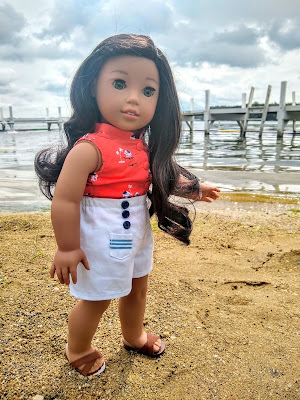 I am so happy with the pictures that I took today, and feeling very happy with Nanea and her new eyes.
at August 21, 2019 No comments:

I finally sent Nanea off for new eyes.

For anyone not following the drama, AG started using less realistic eyes.
These were so unpopular that AG discontinued them and is offering free eye replacements. Here is Nanea before her eye replacement. I put her hair in a net to protect it. 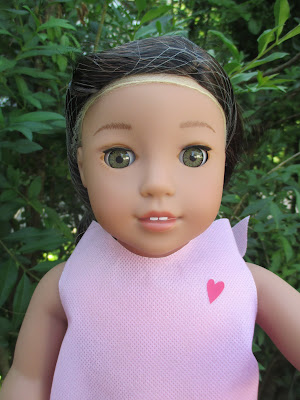 Here is Nanea after her eye replacement.

She came back in good condition. I could not see any damage sustained by the eye replacement process.

I am not adjusting to her new eyes, though. I need to take her outside for a photo shoot.

I compared her eyes to Kanani's hazel eyes. It's hard to compare them when Nanea has such bigger eyes than Kanani.

I thought Kanani's decal hazel eyes look a bit more detailed than Nanea's new ones. There are more lines in there.

I am not sure I can get a good comparison photo of that, and it might be all in my head.

Anyway, I had a good eye replacement experience, so I would encourage you to do it if you have been thinking about it.

Free eye replacements are valid till the end of the calendar year.

Update: Here is Nanea outside on the beach with her new eyes! The Madison Children's Museum Benefit Sale, had T-shirts for pre-order for the first time ever this year.

Astrid got to model the shirt first. She is from a past MCM sale, so that makes sense. 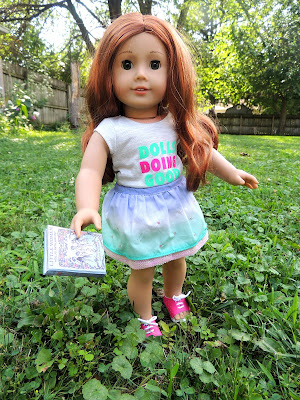 The doll sized shirt has a grey background with the words Dolls Doing Good in pink and teal letters.

I only got the doll sized shirt.

I am rather proud of how I managed to accessorize the shirt.

Surprisingly, the shirt has an American Girl brand tag on the side. We were not expecting that!

I am very happy with the shirt.

I just wish that the words were positioned slightly higher on the shirt, to make it easier to keep them visible when tucking the bottom of the shirt on.
at August 12, 2019 No comments:

Hearts for Hearts dolls Zelia and Nyesha are getting re-released this month.

Currently, Zelia is listed for pre-ordering on Amazon, but Nyesha does not appear to be listed yet.

The Zelia currently listed on Amazon seems to have a new meet outfit!

I wonder if Nyesha will have a new meet outfit? 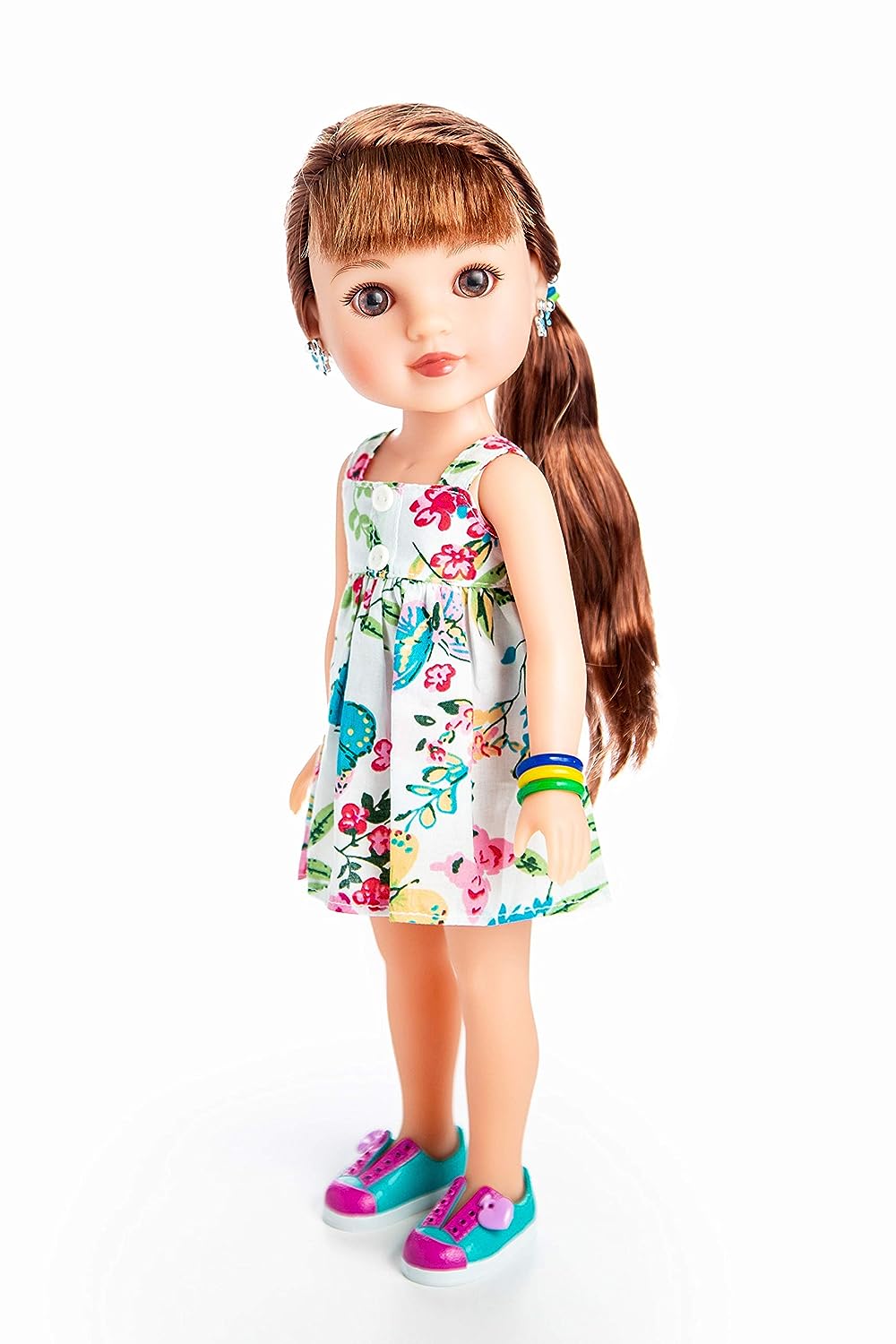 I have decided to name my CYO Aurélie.

Aurélie is French Indonesian, and she likes bright colors and the beach. 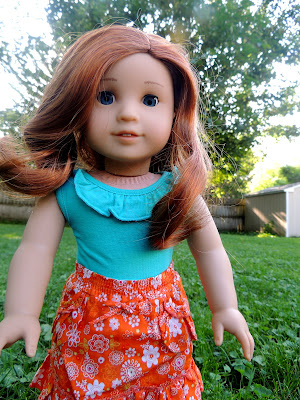 I love her in this outfit.

I need to get a picture of her on the beach, pronto!

I have finally made the custom I have been planning for years.

This is Mara Frances. She is a member of the Ho-Chunk Nation.
She loves animals and the outdoors and outdoor activities like biking and hiking. 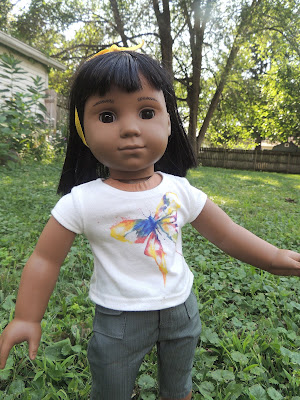 She has an Ivy wig.

I have had the doll and the wig for two years and it took me that long to get up the courage to rip the old wig off.

Here is Mara when I first got her. 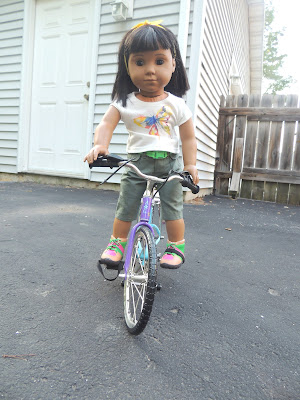 She is my first custom doll, and I am extremely happy with her!

She is named after actress Mara Wilson.
Her middle name comes from another lovely Kaya custom who used to own her wig.
at August 08, 2019 4 comments: