I made a Kermit Hoodie using the Requiem Art Designs pattern.

I feel like I could have done  better job with his eyes and his collar, but that is probably because I am a picky Muppet super fan. 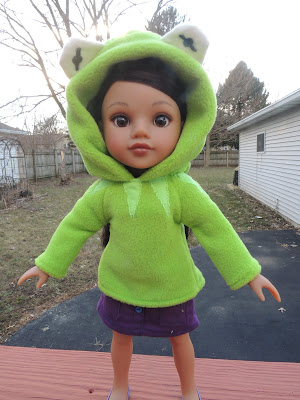 Also, I am not an artist at all.

My model is Hearts for Hearts doll Consuelo.
at March 31, 2019 No comments:

Stella and Astrid also got a change of clothes. 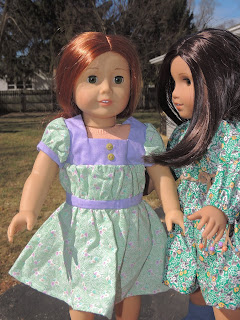 They posed themselves like this as I was carrying them outside. It was like Stella was hugging Astrid. Aaaw. 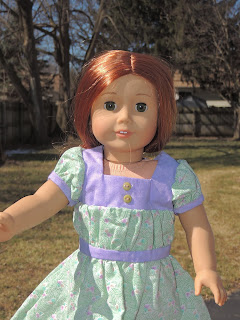 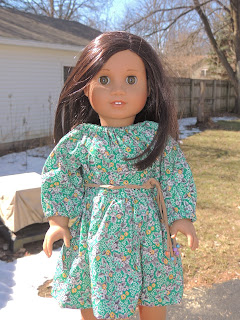 Stella is wearing a dress from Simplicity 8575, which I love.

It's still rather chilly here, but it is sunny enough that I am itching to change doll clothes and take pictures of them.

I don't know about you, but I get sort of restless when my dolls have been wearing the same thing for too long.
I like a change of visuals.

I put Nanea in the yellow dress from last year's Secret Snarker. I love it on her! She looks adorable! 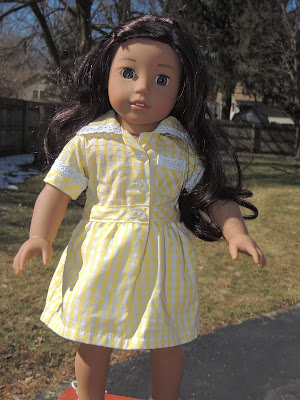 Honestly, it was almost too sunny for good pictures. The sun was casting shadows on the dolls' faces.

I could get used to seeing the sun on a regular basis!

If you look closely, you can still see some snow on the ground behind Nanea.

Jess got to wear the starfish dress. 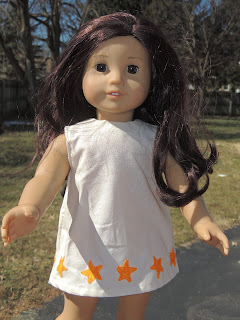 I got a lovely Snarker present from supergreenchiligirl! She is better known as Inky's mom.

This was such a thoughtful gift, and it put a huge smile on my face. 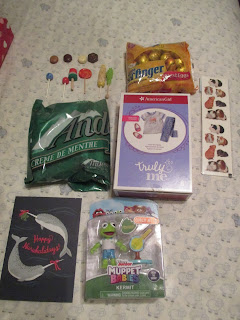 I got a lovely card, candy, guinea pig stickers, S'more PJs, a mini Baby Kermit figure, and an assortment of doll food!

It was all perfect, and a great surprise. 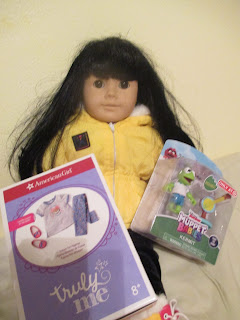 Here is Anne with some of the goodies! 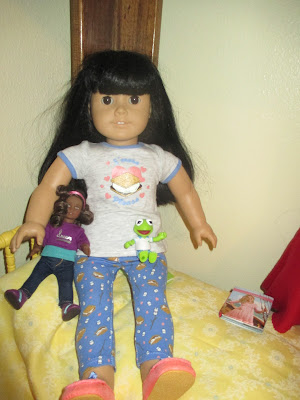 I wanted the PJs whether or not they fit Anne (who is PC and therefore chubbier) but they did fit her!
I am so happy!

I was also excited about the Baby Kermit figure.

I was a huge Muppet Baby fan back in the day, and I have a Baby Fozzie figure, an old McDonald's toy, who can hang out with Baby Kermit.

I guess I need to take better pictures of the doll food, I haven't done that yet.

I was very happy with my Snarker gifts!

Thank you, supergreenchiligirl!
at March 17, 2019 No comments:

I have been making my swap partner a doll quilt as part of the Secret Snarker exchange.

I had several ideas on what to make this year, but I had some Canadian flag fabric I had been saving in case I ever had a swap partner in Canada, so I decided to use that. 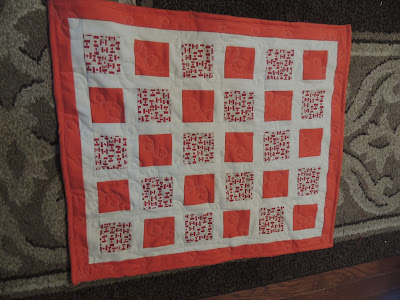 This quilt is a bit bigger than most of the doll quilts I make, but I based the size on the very large blanket that comes with Melody's bed.

I wanted a simple quilt where the design would not overwhelm the fabric, but I also wanted to do something a bit different than just a lot of squares together.

This quilt is, in my opinion, very modern looking and very versatile. 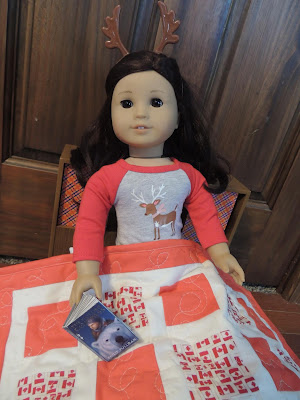 Yes, she is still wearing Christmas pajamas, because they are stinking cute on her, and they match the quilt colors anyway.

I also made four mini doll books from Jinjia Mixed Goods for the swap. They are all fantasy themed.

Jess is reading The Golden Compass in this picture.

So, I hope my swap partner is happy!

I also hope she likes the color red. It was a total accident that everything turned out to be red!
at March 12, 2019 2 comments:

I always have so much fun sewing for someone else, who has maybe different interests than I do.
It really stretches my creativity.

This year I was assigned to thecatsme0w at American Girl Collectors.

One of the dolls that she wanted to receive things for is Luanne, her Western Girl who lives on a ranch. Luanne is a #46.

To create some clothes for Luanne, I used Simplicity pattern number 8359.

This is a pattern made by American Girl, and it features Western clothes. I owned this pattern but had not used it before.

I actually made two things from this pattern.

I made the dress from View B. 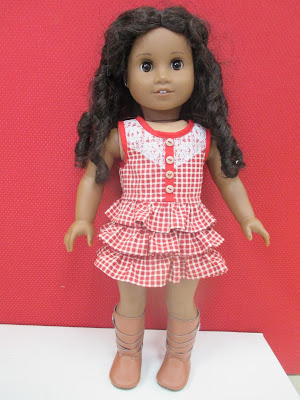 Meritaten is acting as my model here.

This dress looked like something within my skill set, and it was, but it had a lot a lot of pattern pieces.
It was very intimidating when I cut them all out.

I decided that if I better make the dress immediately, or I would procrastinate and make a mental block.

I got in done all in one day, and was pleasantly surprised.

The dress is very cute and looks like the one on the pattern cover.

I also made a skirt from View B of the pattern. 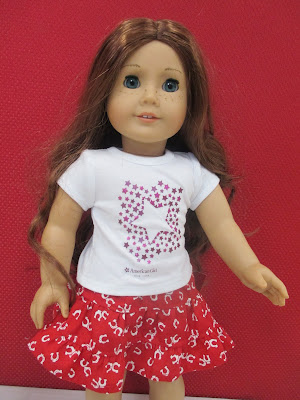 Saige is my model here!

I did not make this T-shirt. I bought a lot of them at the MCM benefit, so I am including one in this swap.

The skirt is tiered and has a horseshoe print on it. The tiers are not photographing well, but it truly is adorable in person. 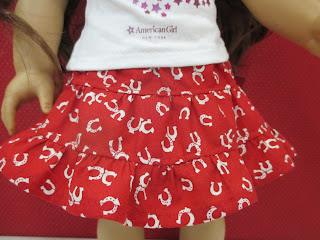 There you can see the tiers!

I made the dress on the same day as the skirt, so I did a LOT of ruffles that day.

The skirt has a very retro vibe to it to me. I thought maybe the skirt's back story could be that it once belonged to Luanne's mother, so it is Luanne's lucky skirt.

I did not mean to make everything red for this swap. It just kind of happened that way. I hope the recipient likes red!

As far as Simplicity pattern 8359, I was pretty happy with it. It was super convenient to have this Western pattern on hand when I needed it.

Like I said, the dress pattern looked very intimidating when I cut out the pieces, but it went together well.

Also, I think this dress pattern could be used to re-create one of the dresses from Lea's collection, the Celebration Outfit. It does not have to be Western if you don't want it to be.

Melody in the Snow

And here is Melody in the snow, playing with Bo!

Bo loves to be outside and to play with his human. 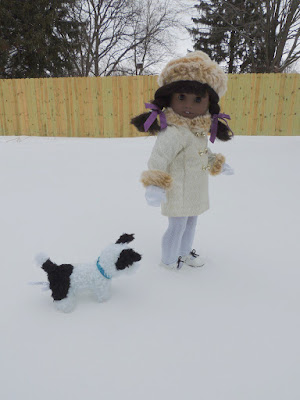 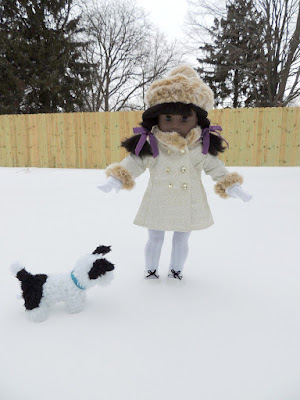