This is another trading card with an illustration from Meet Addy. It shows Addy's parents, Ruth and Ben Walker. 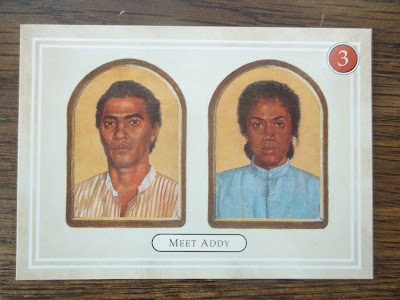 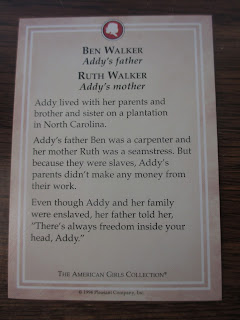 The back of the card says:
"Ben Walker
Addy's father

Addy lived with her parents and brother and sister on a plantation in North Carolina.

Addy's father Ben was a carpenter and her mother Ruth was a seamstress. But because they were slaves, Addy's parents didn't make any money from their work.

Even though Addy and her family were enslaved, her father told her, 'There's always freedom inside your head, Addy.'"

This card does not have a trivia question.

This card is a sweet look at Addy's parents and a reminder of the wrongness of slavery.
at March 07, 2017