At long last, I am reviewing Hodgery Podgery's 1952 Walk-Away Dress.

Hodgery Podgery is the brainchild of Nethilia of American Girl Outsider.

I know that she has more amazing patterns in the works, so this is a shop to keep an eye on!

The 1952 Wal-Away Dress is one that was insanely popular at the time. The dress needed only three pieces to make and could be made in an afternoon. Stores had problems keeping the pattern in stock due to its popularity.

I found the background information of this pattern so interesting!

In order to adapt the doll sized pattern to dolls with large heads and rigid bodies, this pattern does have more than three pieces.

It is so historically accurate and has so many potential combinations, you won't be able to make just one! 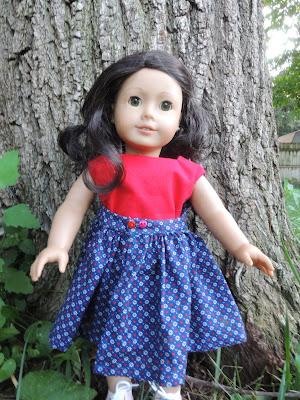 I wanted to use two fabrics because I enjoy color contrasts.
However, it was too dark when I sewed the buttons and, and, um, ... one is pink and one is red.
That is not the color contrast I was going for.

Luckily, this is fixable! 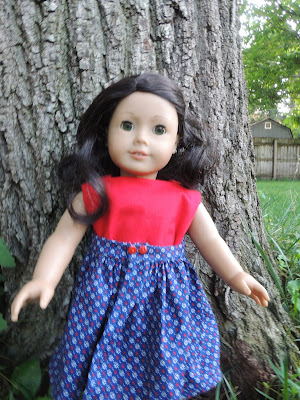 Here is the dress with the matching buttons!

Give the pattern a look. I can think of a few Maryellens that need this dress!
at August 21, 2018