This blast from the past comes to you via my parents' attic.

American Girl trading cards! Who knew this was a thing? If you are a newer fan, you may never have heard of these. I am an older fan, and I had pretty much forgotten that they existed. 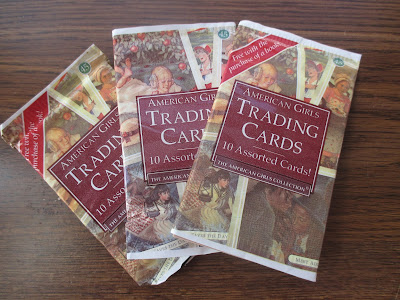 My sister and I had a few of these. I found  6 packs of them in our attic.

The Pleasant Company hoped, I guess, that girls would get obsessed with these and try to collect them all. I don't know anyone who did. My sister and I enjoyed owning a few. They were also inexpensive, which was nice for parents who wanted to give a small gift that wouldn't break the budget.

The packages of some of mine say that they came free with purchase of a book, but I don't remember getting them free with a book, or how that worked exactly. 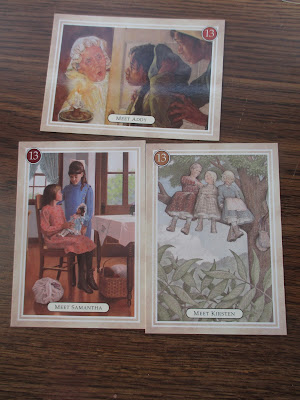 The front of the cards have an illustration from the American Girl doll books, the book title and a number.
I am not sure what the numbers signify. Is this the number of the illustration in the book? The page number?

If I had to guess, which I do, I would say each card is assigned a number to make it easier to collect and distinguish each card. 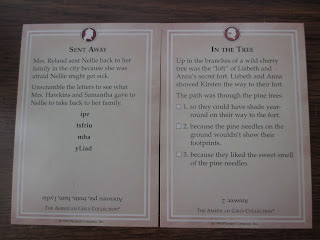 The back of each card has a multiple answer trivia question relating to the book and the illustration..

The answer is written upside down at the bottom of each card. 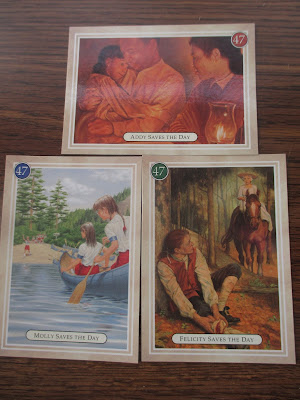 These cards really made me nostalgic for the book illustrations. I didn't really react when they stopped publishing the books with illustrations. I can understand why they want to appeal to an older audience, as the dolls keep being bought for younger and younger girls.

The illustrations really are beautiful, though, and seeing them out of the book setting reminds me of that. I just thought the books themselves were so lovely and special with the illustrations and the faint ivory rectangle around the text. 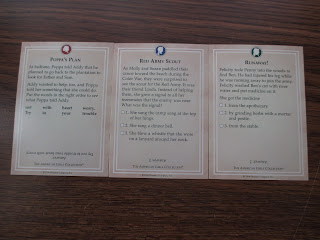 The really nice thing about the trading cards is that they focus on the story, and not on collecting all the expensive toys. I bet they also helped kids with reading comprehension. They are really nice.

I hadn't thought about these in years, but now I am sad that they ceased to exist.

I may post these in individual posts, so that each card gets its day in the sun for new fans to appreciate.
at February 11, 2017