The daughter of one of my friends portrayed Young Anna in the play Frozen.

I was inspired to make a doll sized version of her stage costume, which differs from the one in the movie.

I used the Spring Dirndl pattern by Keepers Dolly Duds.

I first put it on Marie Grace because she looks most like my friend's daughter. 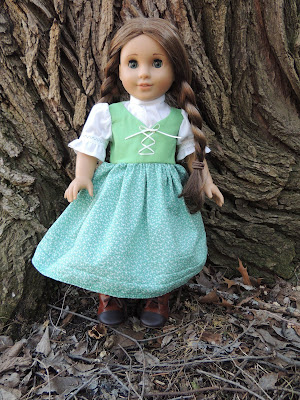 I then put it on Astrid, who is Just Like You 61, because Astrid has red hair like Anna. 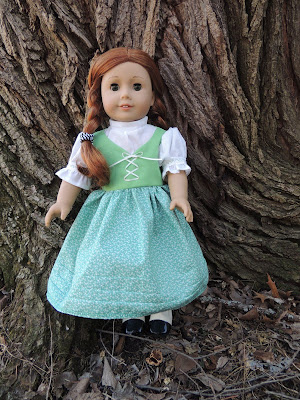 Last, I put it on Kirsten, because Kirsten is Swedish Girl and she doesn't have a dirndl of her own at my house yet. 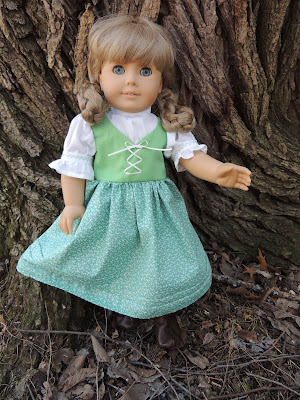 I felt like Kirsten wore it best. This is probably at least partially because it fit Kirsten best. It was a bit wide on Astrid and Marie Grace.

Also, I always feel that Marie Grace has a neck that is slightly shorter than the other dolls, and she doesn't look as well with a collar that stands up.

I was surprised to see that this outfit is all one piece. I expected the blouse, skirt and vest to be separate pieces, and they were not.

This has its benefits. I am going to give it as a gift, and the pieces won't get lost. Also, the skirt won't fall down and expose the doll's midruff.

I could have altered the pattern to make separate pieces and decided not to.

I will admit that I wasn't 100% certain that the green fabrics worked together, but I was using what I had on hand that most closely matched her outfit.
Ultimately, I think it works.
I also think that with dirndls you can be a bit more creative in color combos than with some other clothes.

The pattern was slightly more challenging than I expected.
This might be because I was feeling tired and unwell. I was actually sick in bed the next day.

I would definitely make this pattern again, and I am sure that it will go more easily next time.
at March 08, 2020