She Plays the Violin

When I carefully saved up to buy Anne, my American Girl of Today 6, I planned for her character to be partly like me but also aspirational. She could do things that I couldn't do, but that I wanted to do.

So when AG came out with a violin set for the Girls of Today, I bought it for Anne. I was really proud of it.

Unfortunately, the violin set didn't age well. I last opened it a few years ago, noticed a few things that were broken, and put it away, kind of heart sick. I had kept it very carefully, it just came apart from age and from glue coming undone.

Then I saw a new violin set at the Mattel Toy Store and decided to buy it to replace the one I bought so many years ago.

I was actually surprised when I compared the two sets. The older one was not as in bad condition as I thought it was. 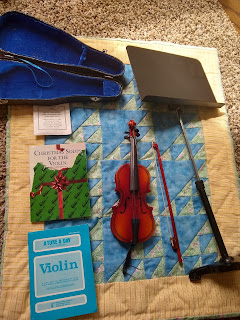 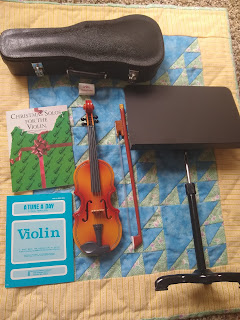 So this is the older set on the left and the newer set on the right.
Some things are exactly the same. The music stand and the music books are exactly the same.
I think that the older violin and bow are made of wood; the newer ones are made of plastic.
The older one looks a bit more realistic, but the problem is of course that it didn't hold up to aging.
The bridge of the older violin has fallen off. I still have it, but I can't get it back in place.
The chinrest of the older violin was either a separate part or has also fallen off. I still have it. It doesn't seem to fit well on the violin, so I am not sure what happened there.
One of the strings on the bow of the older violin snapped, but it still has enough strings left to look okay when the broken one was cut off.

The cases are also very similar, but have slightly different latches and hinges. They are both lined in blue velvet.

The rosin is very different. The older set now just has an empty envelope, and the one one has a plastic rosin.

So, anyway, despite everything, I was able to pose Anne holding the older violin and Ellie holding the newer violin. These pictures mean a lot to me. I wish I could display them like this, but I have no doubt everything would fall down sooner rather than later. 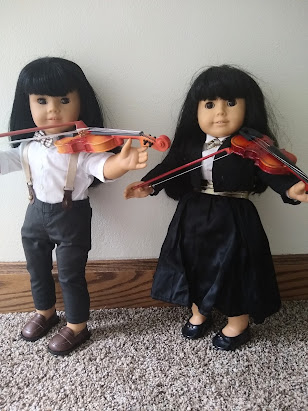 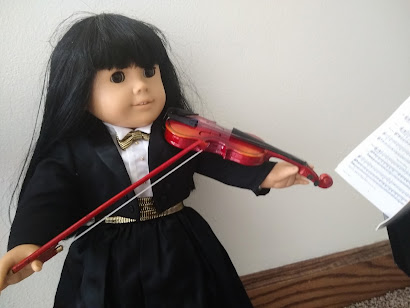 Anne! She is wearing the Girl of Today recital outfit. I have carefully saved it all these years.
Like the violin, it is finally coming into its own. 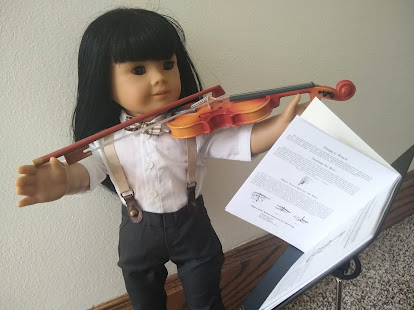 Ellie! Her personality is growing, slowly but surely. She doesn't like dresses, she wants to be a paleontologist, and she plays the violin.
I know the lighting could be better, but these pictures make me so happy.

I have recently been kind of collecting doll food, because I didn't have any, and it seemed like something that would help round out my... 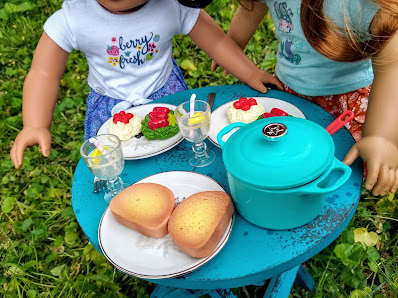