I ended up getting Tenney's guitar and her picnic outfit.

I have never had any interest in the character that AG created for Tenney as a country music singer. It just sounds unrealistic and privileged and I don't like it. 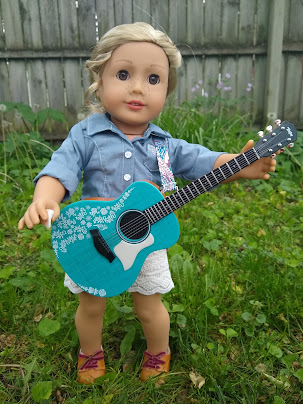 I got Tenney because she is pretty and she was really discounted at MCM. I was also curious about her hands.

Now my Tenney is Saige's best friend, Tessa. Tessa is also an obsessed musician, but at least she is not on the path to fame.

I decided to get the guitar because I wanted to see how well her hands worked for their intended purpose, and it's pretty. I got the picnic outfit because it's pretty and because the shoes seemed like sometime I could use in a  lot of different outfits.

It is pretty, but the shirt doesn't seem to fit as well as I'd like, and I worry about getting the shorts dirty. The shorts also pull down in the back when she sits in them. 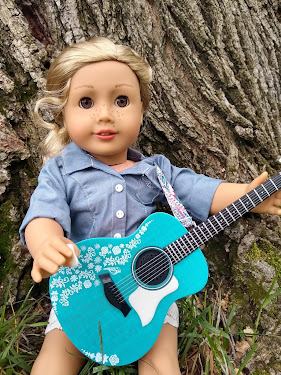 I didn't bother to put batteries in the guitar and make it play its three recorded songs. I am hard of hearing, I don't care about that.

I really didn't like the guitar pick. It's flat on one side. The other side is sort of rounded to make it easier for Tenney to hold it. To me, it looks uncannily like a tooth, especially because it is mother of pearl.

Tenney really does hold the guitar well, it's fun. The hands don't work as well for holding other things, sadly.

Tenney is a lovely doll, and I am really warming up to her. I am glad that I have finally found a new character for her that I like better. She's now Saige's best friend who plays the guitar.

I think I am even going to make it part of their story that Saige painted the guitar for her.