I have been trying to take pictures of Addy in her original meet dress for a while now.
I had limited success, because winter.
But here she is! 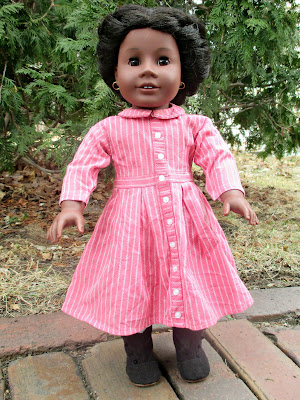 This dress is such a classic. This was Addy's meet dress from her release in 1993 until Beforever was released in 2014. That's 21 years!

So we have all seen this dress, obviously.

I think it is one of the better meet dresses of the original five American Girl dolls. Often their meet dresses were not the most attractive ones.However, Addy's pretty striped pink dress is very pretty!

This dress plays an important part in her story. Miss Caroline gives Addy the dress after she and Momma escape to freedom. Addy must have loved this dress so much!

The dress is also very loved by the girls who fell in love with Addy during the 1993-2014 period.
Like I said, it's just a classic. 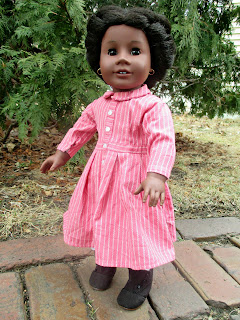 This dress is an everyday dress from the Civil War era, and that is a good thing. There's often a lack of actual everyday clothes  in AG collections, because girls like the fancy clothes. I did myself when I was target age.
This dress is perfect for Addy's meet dress and for her story line. 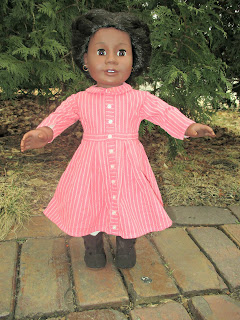 This dress is really a staple for Addy's story and for her wardrobe.