Nethilia from American Girl Outsider was kind enough to send me a book of doll clothes patterns!
It's so sweet of her and I am thrilled.

When I looked inside the book, though, it made me angry enough to want to write about it.
It's not that I am not grateful for the book. However, some things should not be, and we are going to talk about them. 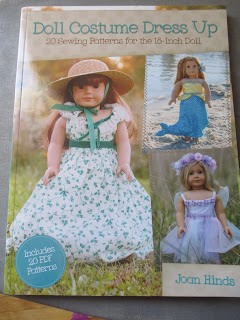 The book is Doll Costume Dress Up by Joan Hinds.

The book is very pretty, and it uses actual American Girl dolls in the illustrations. This is not common due to copyright concerns.

It has a lot of the costumes that you would expect. Some of them you can see on the cover- Southern belle, mermaid and fairy. Others include ballerina, ball gown, ladybug and super hero.


Here is the table of contents. 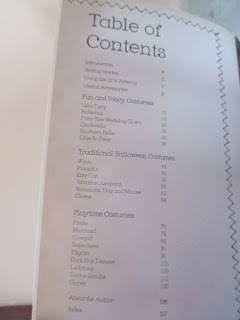 The very last pattern is a Gypsy costume. This is extremely offensive.

These are real people. They are called the Sinti and Roma. They do not like being called the G word.
Calling someone or something the G word is horribly rude and mean.
Don't do it.

The Documentation and Cultural Center for German Sinti and Roma says,
"the term "Gypsy" is an exonym of the majority population whose origins date back to the Middle Ages and which is rejected by the minority as discriminatory. When it is used in the context of historical sources, the clichés and prejudices behind this term must always be borne in mind. The term cannot be clearly derived etymologically. It comprises both negative and romanticized imagery and stereotypes which are attributed to extant people. The term is therefore first and foremost a construct."

Making a G word costume is also offensive. It's like dressing up in blackface.

I should also mention that Girl of the Year Isabelle was guilty of this in making a gypsy ballet costume.
That was a very wrong and offensive thing for American Girl to do.

The Sinti and Roma have a history of being discriminated against, and it's very sad. They were targeted by Hitler, but the discrimination they face did not begin or end there.

The same goes for sewing clothes for ANY minority. Treat others with dignity. It is not hard. 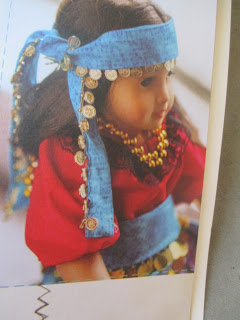 The description written about this outfit in this book made me shudder. It's very disrespectful.
I am not going to post it here, because I don't want to spread the stupidity.

What really made me mad is that this is not even the first G word costume I have seen.

How awful! By combining these two groups into one pattern, it equates the Sinti and Roma with pirates. I love Talk Like a Pirate Day and dressing up like a pirate, but they were murderers.
It is completely inappropriate to equate criminals with a real group of people who face discrimination already.

When some collectors wrote to the pattern designer protesting this, they were brushed off very rudely.

This pattern has now been renamed, but it was still available long after its problems had been brought to the designer's attention. It should never have been there in the first place.

I will never buy a pattern from Jen Ashley Doll Designs because of her behavior. The fact that the pattern eventually got renamed is no excuse.

Furthermore, these patterns have clearly not been researched at all.

Edaj from American Girl Collectors asked people to make clothes for dolls. The dolls and clothes were going to be donated to Romani foster kids in the Czech Republic, to encourage pride in their identity.

She described a traditional Romani dancing costume for females. She asked for a long, full, skirt with a ruffle, preferably in red, that would be worn for dance performances.
These costumes do not resemble this in the least.

Of course, no one would wear a dancing costume all the time, but they would not have worn THIS either. It's a stereotype, and no one bothered to research to see if the stereotype had any resemblance to reality.

You can read Edaj's comments here.

There are so many wonderful doll clothes we can make.
WHY would we want to sew something so ignorant and disrespectful of someone's background and culture?

I want to clothe my dolls with dignity and with respect for others.

Sources:
The Documentation and Cultural Center for German Sinti and Roma is a wonderful source of information, which I was lucky enough to visit in Heidelberg.
at March 22, 2017

Email ThisBlogThis!Share to TwitterShare to FacebookShare to Pinterest
Labels: patterns that should not exist, sewing doll clothes, Sinti and Roma